Our first trip to Ecuador we spent our two months in Same, a quiet town that was once a local tourist destination.  We shopped at the small markets in Same and Tonchique.  Our first experience of Ecuador was very intimate having stayed in the smaller village.  When we first arrived to EC, we kept a low profile when venturing to Atacames, the nearby big city.  Having read the travel guides front to back, we thought Atacames was a city of only crime, parties and noise pollution.

After experiencing Atacames firsthand, our misconceptions were resolved.  We decided this time around, we would stay in the city for a deeper immersion into the culture of Northern Ecuador.  Also, networking is one of the benefits to city life so we knew staying in Atacames would connect with others important to our future plans.

Atacames definitely stands up to its reputation of a grande fiesta!

The first night we arrived in Atacames, all we could think about was sleep.  The day had been a very long travel day and the stressors of Old Yeller’s gear shifter breaking off had worn us out!  Our apartment in Atacames had a view into the heart of the city and overlooked the soccer field.  The place was located on the edge of town so we had hoped to avoid the ruckus of the city.

The apartment was clean (enough) and Captain and I quickly settled in a slumber around 10 o’clock.  It was a matter of minutes of having closed my eyes when I heard muffled music from outside.  “Great….our neighbors are ‘The Louds’…is that Thriller?”  I was very perturbed but smiled knowing even Ecuadorians appreciate Michael Jackson.  The playlist continued with Whitney Houston’s ‘I Will Always Love You.’  I swear these were the only two songs on the playlist as they just kept repeating…

I fell asleep to the soft hum of the predictable playlist.  All of a sudden, I was awaken by extremely loud Spanish echoing through our apartment.  Captain and I looked at each other.  “We will not be staying here for 2 months…”  I was exhausted.  All I wanted was some peace and quiet.  Captain got up to see what was going on and a moment later he yelled from the balcony, “You gotta come see this!”  If he was making me get out of bed, I knew there was something worth seeing.  I joined Captain on the balcony and was faced by the scores of Ecuadorians dancing to the salsa beat.  “Who starts an outdoor concert at midnight?!?” I felt so defeated.

The next morning we spoke with the landlords.  If this was going to happen every weekend we were heading back to Same.  Turns out a national salsa star was on tour and we got to hear her Atacames show for free!  The following weekend was relatively quieter but celebrations continued and were not limited to the evening.  During the 2 months we were in Atacames, we witnessed at least 3 parades and that doesn’t account for the 2 thirty car caravans of celebrating the huge soccer wins.

Captain and I do not venture out at night much.  We enjoy evenings together at home versus late night outings.  But occasionally the sun will go down on us while on our way home.  Once in a while, we will leave home after dark to get a beer or sweet treat.  Never were we intimidated by the night life culture or people of the city.  As we would with any bigger city, we avoid situations that could potentially put us in harm’s way.  No midnight strolls on the beach.  No drunken nights at the bar with strangers.    Barcelona, on the other hand, loved the night life.  “Guys, it’s great!”  Telling us about his nightly escapades, “Everybody is out dancing and having fun.  Rarely do you see someone out there falling down drunk.  They love my Canadian coins and I have never felt unsafe.  Really great people here, ya know.”

In the few months we spent in Atacames, improvement of the city was noted.   A colorful sidewalk was built along the main road into the city.  What a beautiful amenity to welcome guests into Atacames.  The construction workers also began knocking down the cement wall across from the new sidewalk.  This opened up the view to the bright green soccer field and the beach front property beyond it.

Sharing our experiences of Atacames with the Boatmasters, we learned the city had already made great strides in the previous months.  “I talked with the sheriff’s wife and told her tourists don’t want to come to dirty cities.  Since then, they really cleaned the city up.”  From there on out, we appointed him the Governor of the North.  He sure knows who to talk with to make things happen…

Atacames has a lovely beach that is popular to the locals on sunny days.  Depending on the time of year, the beach can be very busy.  Captain says if Atacames was like the Jersey Shore, people would be standing shoulder to shoulder with no room to lay down a beach blanket. As with Same’s beach, the beach goers tend to crowd together.  It’s like there are lines drawn in the sand and anyone on the beach must stay within the imaginary lines.

I don’t understand why on a beautiful long beach, everyone is crowding one another in the ‘designated area’ while the rest of the beach is left bare.  It just so happened, me and Captain’s favorite spot on the beach (well away from the crowd, of course) was right in front of Barcelona’s hotel.    We pointed out the ‘imaginary line’ phenomenon to Barcelona and his response was “Yeah.  I bought the hotel and the beach came with it!  This is private property, ya know!”

Each day when I would hear, “Hey Gringos! Get off my beach!” I knew Barcelona had spotted us from his hotel and he’d be down shortly.

When the tide is rolling in, there are huge waves perfect for body surfing.  The days Barcelona wasn’t busy searching for property (which were most days!), he’d join us for fun on the beach.   We spent many afternoons playing in the warm Pacific Ocean, surfing the waves of the incoming tide.  The three of us were the biggest kids playing in the ocean.  It was fun as the local kids would follow our lead, riding the waves in on their bellies.

The boardwalk in Atacames is like any other beach town.  Shop after shop sells cheap toys, generic trinkets and China-made jewelry.  Shirts are covered with “I heart Atacames” and beach attire is available for everyone.  Tiki bars are starting the party with cheap drinks and loud music.   Walking out the beach, you will be approached by tour guides selling tubing rides, whale watching tours, parasailing and locals renting boogie boards.

In Atacames, we walked everywhere.  It was a weekly ritual to walk our clothes down to el lavandaria.  For 50 cents a pound, the ladies (and occasionally a young man) would wash, dry and fold it all, even our underwear!  One of our first trips, I was unloading our clean clothes from the black trash bag our clothes were returned in.  I pulled out a small light blue shirt with stripes.  At first I thought they had shrunk one of Captain’s shirts.  Next I pulled out a tiny pair of tightey-whiteys with dinosaurs on them.  These were definitely not Captain’s!  “I bet someone is missing these!” I said, holding up the undies.  I wondered if anyone was at home doing the same thing but holding up my panties!  From there on out, we were sure to count our clothes before taking them to the laundry mat!

With a greater supply of fresh foods in the city, Captain and I were able to shop around and find the best prices.  We became loyal customers to a particular stand because they offered us the same prices as the locals and always served us with a smile.  When pulling out our shopping list, the ladies would giggle.  Surely they were entertained by Captain’s Spanglish.  Our grocery shopping always seemed to be a big production.

Around the corner from the produce stands was the fish market with all types of sea creatures, from red snapper and shrimp to calamari and lobster.  Meat markets are also found nearby and throughout the city.

Rarely do I eat animals, so I pay little attention to what’s on sale at the local butcher.  The huge chunks of raw meat are often a distraction but this particular day it was the butcher who had my attention.  He stood there wearing a white apron smeared with blood.  In the hot Equatorial sun, the butcher was heating up.  And so was his meat! After he wiped his brow with a hand towel, he returned to swatting the flies landing on his raw meat.  My eyes met with Captain’s.  He had witnessed it as well.  We both started cracking up.  I was reminded why I strictly follow my plant-based diet in Ecuador… 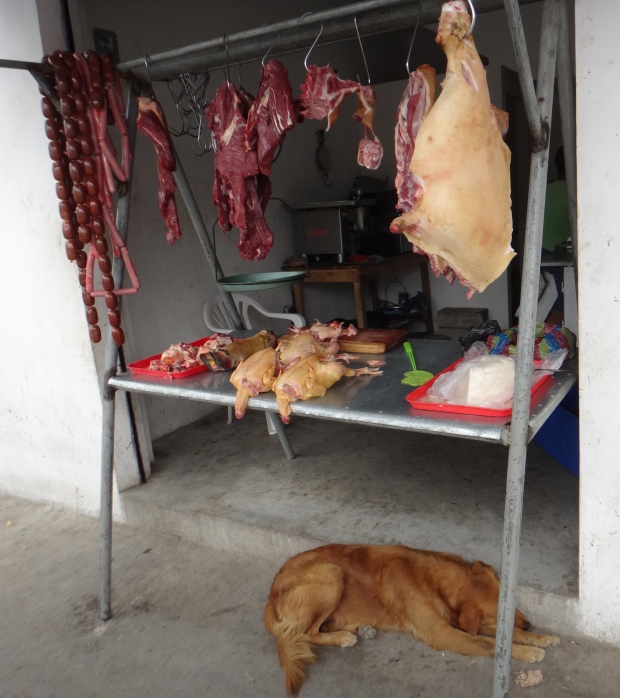 With so much counter space, why must the butcher put the cheese directly below raw animal flesh?  I am not sure what’s worse: fly guts on a steak or blood-flavored cheese.

Captain loves his ‘Colonel Sanchez Chicken’.  The outdoor rotisseries vary in size; some cook 2 or 3 chickens, others more than twenty.  The roasted chicken is always moist and for six dollars, you can buy a half chicken.  They slide the chicken off the rotisserie and chop it in half with their all-purpose machete.  The meal comes with white rice, lentils and a salad of iceberg lettuce and a tomato slice.  Captain doesn’t believe chicken is meat so he conveniently forgets what we see daily at the local butcher shop.  Me, on the other, the vision of the butcher swatting flies is burned in my brain.  I don’t like roasted chicken that much…

Captain loves his sweeties so we scouted out all the delicious panaderias.    We have tried every sweet treat and are yet to be impressed.  Rarely are they sweet and all lack creativity.  Why is this?  Sugar cane grows like weeds and cacao is a cash crop here.  The abundance of fresh juicy fruit are much healthier options but if you need a refined sugar fix, an overpriced jar of Nutella can be found at the local Aki.

Our most exciting find was the video store.  All the latest new releases were advertised in the window. Captain and I went inside to see what an Ecuadorian Blockbuster was like.  When I saw Argo on the shelf, I proclaimed, “I thought this was still in theaters?!”  After figuring out the movie could be watched in English, we decided to take it home.  “A dollar fifty for a new release?  We’ll take it!”

The next morning we returned the video and the man behind the counter grimaced.  He took the video out of the case and put it into the DVD player.  He switched the language to English, pushed play and the first scene began. The man turned to us with a questionable look on his face.  It was at this moment we figured out what was going on.  We hadn’t rented a movie last night…movies were not for rental, they were for sale.  And they were all pirated.

***Disclaimer: I am not admitting to buying pirated films but I will say five dollars for four new releases is a steal!***

I was surprised with Atacame’s strong personality and great potential as a thriving tourist town.  Living in the city, I came to know Ecuador better than just taking the guide books’ word for it.  I’ll choose my jungle/beach/waterfall property over city living any day but I am pleased to say the nearest big city to our home will be Atacames.

← A Garden in Bloom
Friends in High Places →

Your comments and questions are welcomed! Cancel reply